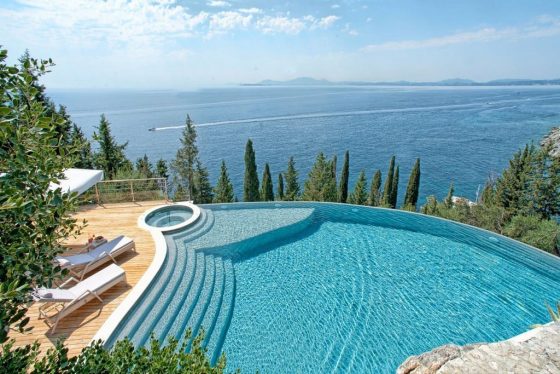 From winding historical streets lined with restaurants to hillsides dotted with olive groves to vast aquamarine seas, Corfu—one of the major islands that make up Greece’s Ionian Islands—truly has it all. A place beloved by artists and writers alike, the island has been a popular tourist destination for generations. Influenced by centuries of rule by the Venetians, the French, and the British, Corfu stands as a cosmopolitan gem among the Ionian Islands.

Despite its popularity as a tourist destination, Corfu remains one of the most charming and beautiful islands in Greece. An escape unlike any other, Corfu and the Ionian Islands should be at the top of your travel list. 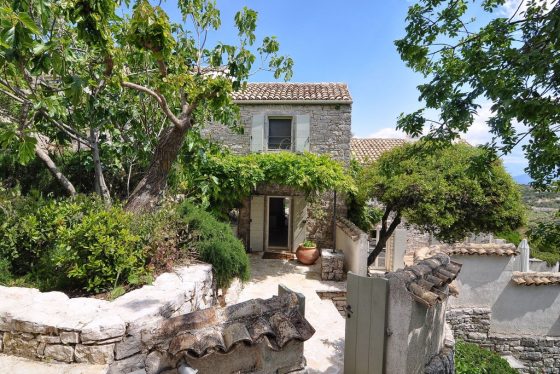 With a history shaped by its numerous occupiers, Corfu boasts a unique cultural landscape. Stepping into the beautifully preserved Old Town of Corfu is like going back in time; the UNESCO World Heritage Site features a blend of the various Eurpoean nations that used to rule there. The long Venetian rule left its mark in the form of narrow, cobbled streets, winding passages, and secluded city squares—characteristics that wouldn’t be out of place in Italy or France. Take in the city and discover its many stories by paying a visit to Liston, the French-influenced arcade that runs along the north end of the Spianada square. Spend an afternoon in the Museum of Asian Art, where thousands of artefacts are housed in a building designed for the British Protectorate in 1818.

Outside of the Old Town, the island is rich in historical monuments and other markings of its many lives. Take, for instance, the Agios Stefanos Centaurea estate, a one-of-a-kind property whose history dates back over 200 years. Restored by the British architect Dominic Skinner in 2005, the property is part of a traditional village set on a private hillside dotted with cork trees. Complete with stone archways, a private plunge pool, and breathtaking views, the home is a prime example of history blending with modern luxury. 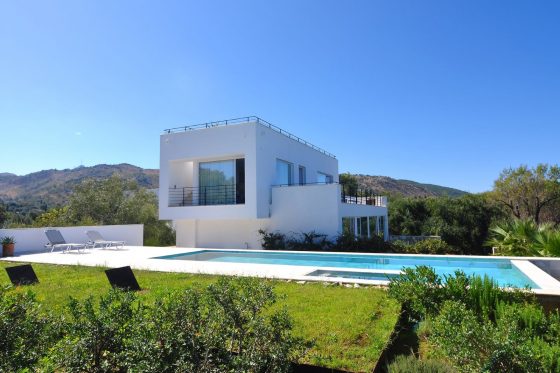 Considered one of the greener, leafier Greek islands, Corfu’s reputation as a giant olive grove is one of its defining features. In addition to the vast amounts of olive trees—which are rarely pruned, resulting in a wild and beautiful tangle of greenery—the island is also home to lemon trees, orange trees, Italian cypresses, oaks, and elms. The result is a place that is as awash in natural abundance as it is with culture and history.

Surround yourself with the lush greenery for which the island is known by setting down roots in this modern villa on the northern side of Mount Pantokrator. Located in a quiet area only forty-five minutes from Old Corfu Town, the villa sits nestled among a grove of olive trees at such an elevation that the view of the Ionian Sea and surrounding mountain ranges is nothing short of magnificent. Take it all in while drifting in the private pool, or dine al fresco on the rooftop terrace, which provides a perfect vantage point for drinking in the home’s natural environs. 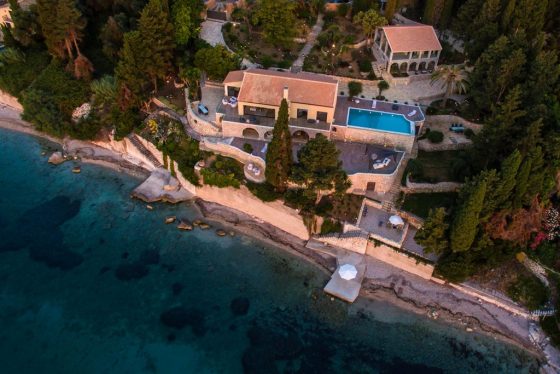 The views—mentioned time and time again in literature and travel guides alike—really are one of a kind on Corfu. Idyllic bays of turquoise and deep blue, verdant landscapes, and the bougainvillea-covered cathedrals live up to the descriptions found in the writings of Lawrence Durrell and Edward Lear. Despite being a tourist destination, the island has been able to retain much of the elegance that continues to draw people from around the world to its shores.

Sitting above its own private beach, as if straight from the pages of a novel itself, this picturesque property is far from fiction. The sparkling Ionian Sea spreads out beyond the rocky cliffs and spry greenery surrounding the seven-bedroom home. A large lounge deck and infinity pool put the landscape first and foremost here, while modern, stylish interiors and smart home technology ensure little distraction from the natural setting.

A Paradise for Food Lovers 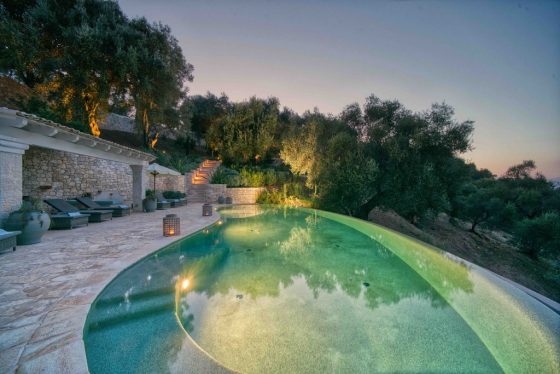 In addition to the feta salads and souvlaki that many visitors to Greece expect to find, you’ll encounter something a little more authentic—and uniquely Corfiot—on this Ionian Island. Influenced by Italian and Greek cuisines alike, Corfiot food incorporates much of the bountiful produce that grows on the island, including fresh kumquats and olives. Dishes like sofrito—veal slowly cooked in wine, parsley, and garlic—and bourdeto—tomato and scorpion fish stew—put Corfu on the map as an appealing stop for those who travel for food. Be sure to pop over to the village of Agni, a small area north of Nissak, which is known for having three of the best restaurants on the island.

Settled among the olive groves, this tranquil villa is situated above San Stefano in the north-east region of Corfu. With its own gardens and pergola-covered terrace, the home is primed for evenings spent dining under the stars on dishes featuring olives harvested from the estate itself. With bright, high-ceilinged interiors and room for up to 12 guests, the villa is the perfect home base for many culinary adventures shared with friends and family.

The Greek islands have captivated the imaginations of many throughout history, and they continue to reveal their stories to those who visit. While a short visit is always worthwhile, the charm of Corfu may convince travelers to stay a little longer. After all: there are many islands to discover, but there is only one Corfu.

Explore idyllic Greek island homes to see the best of Corfu and the Ionian Islands.

The post Escape to Corfu | Why the Ionian Islands Should Be Next on Your List appeared first on Sotheby’s International Realty | Blog. 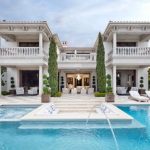 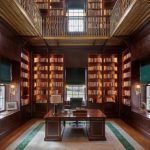 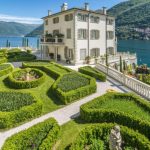 Picture a Wedding at These Luxury Properties